skip to main | skip to sidebar

Were back! Last weekend, we returned from our trip to Europe. We had perfect travel on the way over there, and on the way back, we were about 5 hours late due to the volcanic ash, but not a big deal.  We both expected some big hangup since it seems like every time we go on a big trip, we always have a travel horror story, but this one was pretty smooth.
We arrived in Brussels on Friday morning and picked up a car at the airport.  I seriously underestimated how hard it would be to get around Brussels- we had maps- several of them, but this town was so hard to navigate.  To start with, some of the street signs are in French and some are in Dutch, which would not be a big deal, except that you can't see the street sign until after you have already turned down the street.  Many times, the streets would change names (like every block) and there was always some construction or one way streets that got in the way.  Anyway, we finally found the Marriott- we stayed downtown by the Grand Place so the location was great.  It took us close to 2 hours to get to the hotel from the airport and when we left the following week in a cab, it took 15 minutes, so clearly we made a few wrong turns!

After a quick shower, we decided to walk around the city.  The first stop was the Grand Place.  This is a central square that houses the town hall, restaurants, chocolate shoppes, and the city museum among other things.  The Gothic architecture was amazing on these buildings! 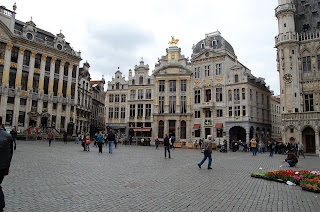 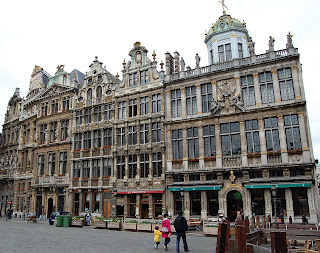 I took advantage of the close proximity of chocolate shops and decided to get a few pieces from each one.  I sampled my chocolates throughout the afternoon, and decided that Neuhaus has the best chocolates! My favorite one was called a "caprice", it had a dark chocolate coating and was filled with this amazing vanilla cream. 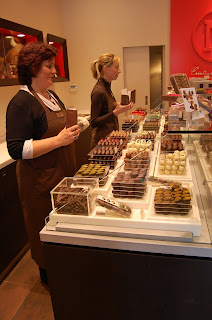 After I had my chocolate craving satisfied, we headed over to the beer museum where John had his first Belgian beer. 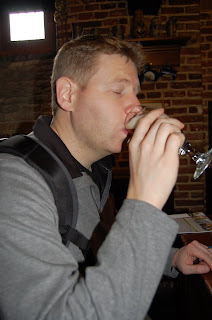 We took a self guided walking tour and saw Mannekin Pis.  It was much smaller than I expected and very crowded, but I managed to get a few shots of the him. 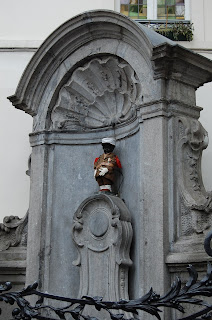 John found his first of many beer stores: 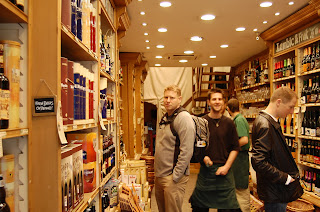 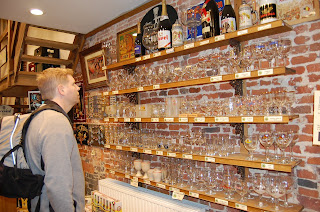 We went to the comic strip museum, but after John learned that they only had comic strip info on Belgian comics, he did not want to pay to tour the place.  Belgium has more comic strip artists per square km than anywhere else in the world, so it was not uncommon to see cartoon sketches on the sides of buildings or walls.  The smurfs originated in Belgium and that was the only character that I recognized. 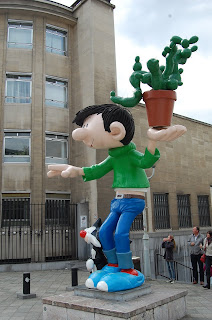 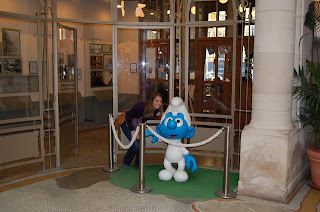 We found a great place to eat through the Rick Steve's travel guide (best travel guide author ever), although I did not get any pictures of us at dinner.


The next morning, we were off to Reims, France, but first we had to figure out how to navigate our way out of the city..
Posted by Jen at 5/17/2010

Jen
life is good! living in Charlotte, NC (although a CO girl at heart), love spending time with friends, love my family and love our dog.